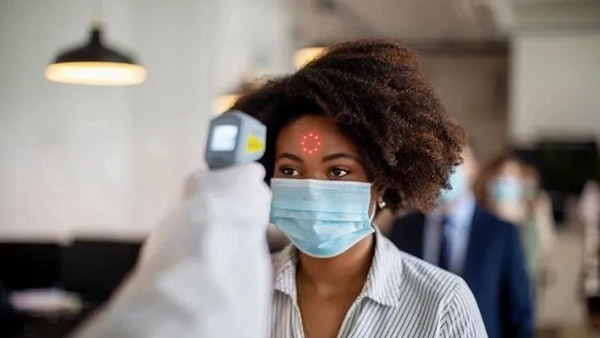 Three new scientific studies published this month show that the COVID-19 virus can spread in more ways than we once knew. Research from various parts of the world considered three separate factors in each study: low humidity, public restrooms and airborne dust. The implications from all three of these studies? Mask up!

A study just published in Transboundary and Emerging Diseases confirms an earlier study conducted in the Greater Sydney, Australia area during the early stages of the pandemic that reported a link between low humidity and community spread of COVID-19. The new research led by Dr. Michael Ward in the Sydney School of Veterinary Science adds to the growing body of evidence that low humidity is a key factor in the spread of the Coronavirus. The scientists estimated that for a 1% decrease in relative humidity, COVID-19 cases increase by 7 to 8%. The same link was not found in other weather patterns such as rainfall, temperature or wind.

According to Ward, dry air favors the spread of the virus: “”When the humidity is lower, the air is drier and it makes the aerosols smaller,” he said, adding that aerosols are smaller than droplets. “When you sneeze and cough those smaller infectious aerosols can stay suspended in the air for longer. That increases the exposure for other people. When the air is humid and the aerosols are larger and heavier, they fall and hit surfaces quicker.” These findings add to a growing body of research that recommends wearing a mask.

A second study conducted by Chinese researchers from Yangzhou University reported that flushing a public restroom toilet or urinal can release clouds of virus-laden aerosols that can be inhaled, posing a serious public health challenge. The scientists simulated and tracked virus-laden particle movements when toilets and urinals were flushed. They discovered that flushing involves an interaction between gas and liquid, resulting in a large spread of aerosol particles.

The disturbing results revealed that the trajectory of the particles ejected from flushing showed that more than 57% of the particles traveled away from the urinal. The researchers further point out that when men use urinals in a public restroom, these tiny particles can reach their thigh within 5.5 seconds when compared to the toilet flush, which takes 35 seconds to reach slightly higher. “From our work, it can be inferred that urnial flushing indeed promotes the spread of bacteria and viruses,” said Xiang-Dong Liu, one of the study’s authors. “Wearing a mask should be mandatory within public restrooms during the pandemic, and anti-diffusion improvements are urgently needed to prevent the spread of COVID-19.”

A third study from the University of California, Davis and the Icahn School of Medicine at Mt. Sinai reported that influenza viruses can spread through the air on dust, fibers and other microscopic particles. Until now, scientists assumed airborne transmission occurred mainly due to respiratory droplets by coughing, sneezing or talking.

The scientists examined whether tiny, non-respiratory particles could carry influenza between guinea pigs. Using an automated particle sizer to count airborne particles, they found that uninfected guinea pigs give off spikes of up to 1,000 particles per second as they move around the cage. Particles given off by the animals’ breathing were at a constant but lower rate. Immune guinea pigs with influenza virus painted on their fur could transmit the virus through the air to other, susceptible guinea pigs, showing that the virus did not have to come directly from the respiratory tract to be infectious.

Next the researchers tested whether microscopic fibers from an inanimate object could carry infectious viruses. They treated paper facial tissues with influenza virus, let them dry out and then crumpled them in front of the automated particle sizer. Crumpling the tissues released up to 900 particles per second in a size range that could be inhaled. They were also able to infect cells from these particles released from the virus-contaminated paper tissues. According to the researchers, the surprising findings that dust can spread viruses have obvious implications for Coronavirus transmission and use of masks for protection. Plus, they said, it opens up an entire new field of investigation on how outbreaks are interpreted.